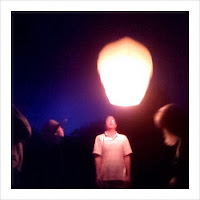 did the winter solstice in 2000. Both are a celebration of light.
Posted by Don Werthmann at 8:55:00 AM No comments: 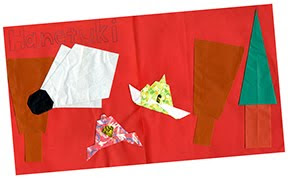 20 May 2010 I had the honor of meeting six school children at the Sadako Children's Memorial in Hiroshima, Japan. Although our serendipitous encounter was very short, it was one of the most amazing and mysterious experiences of my visit. This paper construction I received was produced by kids from Kamigo Elementary School, Yamaguchi Prefecture, Japan. Endearingly misspelled, Hanetsuki is a game similar to badminton, without the net. You'll soon learn that the remainder of this posting has nothing to do with the game, but instead provides only a tactile memento of this wandering.

When this group of kids approached me, each introduced him/herself in English with facts about where they were from, and questions for me regarding where I was from. Not that this was anything unusual. As a Westerner at a significant destination such as this in Japan, it is a very common to be approached by a group of school children and asked to participate in a brief cultural exchange. What made this encounter particularly unique is that I had been desperately seeking for a maigo (lost) student of my own for almost a hour, and let me just say that his personality and biological predisposition warranted my heightened concern and anxiety for his well being, let alone his whereabouts in the thick of a major Japanese city. As far as I was concerned, it was going to take me the remainder of the day to find him, if at all.
During the first few moments of this encounter with these kids I probably conveyed hesitation and some resistance to engage in their request, due to my anxiety. What I remember saying to myself was, "I simply can't afford to do this right now." But what I discovered in the passing seconds was a melting away of stress, an opportunity to take a deep breath, and get myself centered. Anxiety was exchanged for peacefulness.
They handed me the Hanetsuki construction, we bid our respectful farewells, I walked about 30 sobered paces; and there he was. I found my student emerging from some heavy pedestrian traffic, blissfully on his way to this site. Relieved and mystified to see him, I nonchalantly greeted him and expressed some urgency that we needed to catch up to the other 17 people in our group. I'm not looking for an explanation, I'm just going to go with this one, but I am once again participant to synchronicity, with a bit of Zen mixed in for spice.

I received the paper construction as a very meaningful gift, and I treasure it, but hindsight, the entire episode is a gift. I am so thankful for those kids for making my visit so special, and my memories of Japan so powerful. The more I think of it I am beginning to grow strangely thankful for my student getting lost and found — now that is one unusual gift.
Posted by Don Werthmann at 8:00:00 AM No comments: 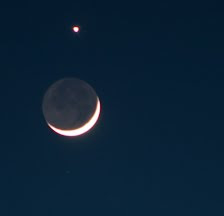 This is the cherry that tops off a truly amazing week in Japan. After an eventfully long day, this celestial event immediately took me back out again — the Moon and Venus setting together. When I arrived at the lake shore, an old man was fishing while sitting on the rocks in the darkness. He was obviously content to send out another cast and we witnessed the spectacle together. Whether he caught anything tonight, or not, is another story. All I know at this minute is that I am very fortunate to know Japan as a deeply mysterious place, where synchronicity can have incredible positive flow within a culture of immeasurable rules, etiquette, and protocol.
Posted by Don Werthmann at 8:02:00 AM No comments: 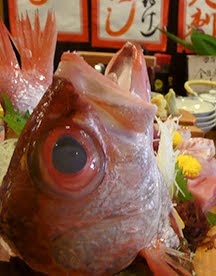 The market at Choshi can bring almost any seafaring food to the table. I'm Immersed in salt air (shiokaze), good friends, and this beautiful specimen staring me down. I'm here to see new things, to get hooked on my camera again, and serve the world with light, color, and design.
Posted by Don Werthmann at 10:30:00 PM 1 comment:

Don Werthmann
Michigan, United States
Forged in the City of Detroit my photographic life spans over thirty years. Formed by traditional tools and techniques, it is hammered into its current shape by the hyper-accelerated pace of digital media technology.

I am part of a quatrain of kids [fourth in birth order to be exact] and at a very early age life said, "follow your bliss and live to learn while embracing the idea that this journey is going to be hard work; and then always be adaptable to change." Maybe coincidence but as things continue to turn out, choosing a career in photo and digital media fit life's calling. I work hard, and most frequently think that life is serious business, but I also frequently seek to enjoy moments when it doesn't need to be, with intriguing foreign travel.

I am just an awful musician, yet recently discovered I have perfect pitch, which simply means that I have plenty more work to do.

Quatrain ƒotographic sets out to offer services and products that bring out the best in me as a teacher, digital artist, visual poet, and passionate practitioner of photography.